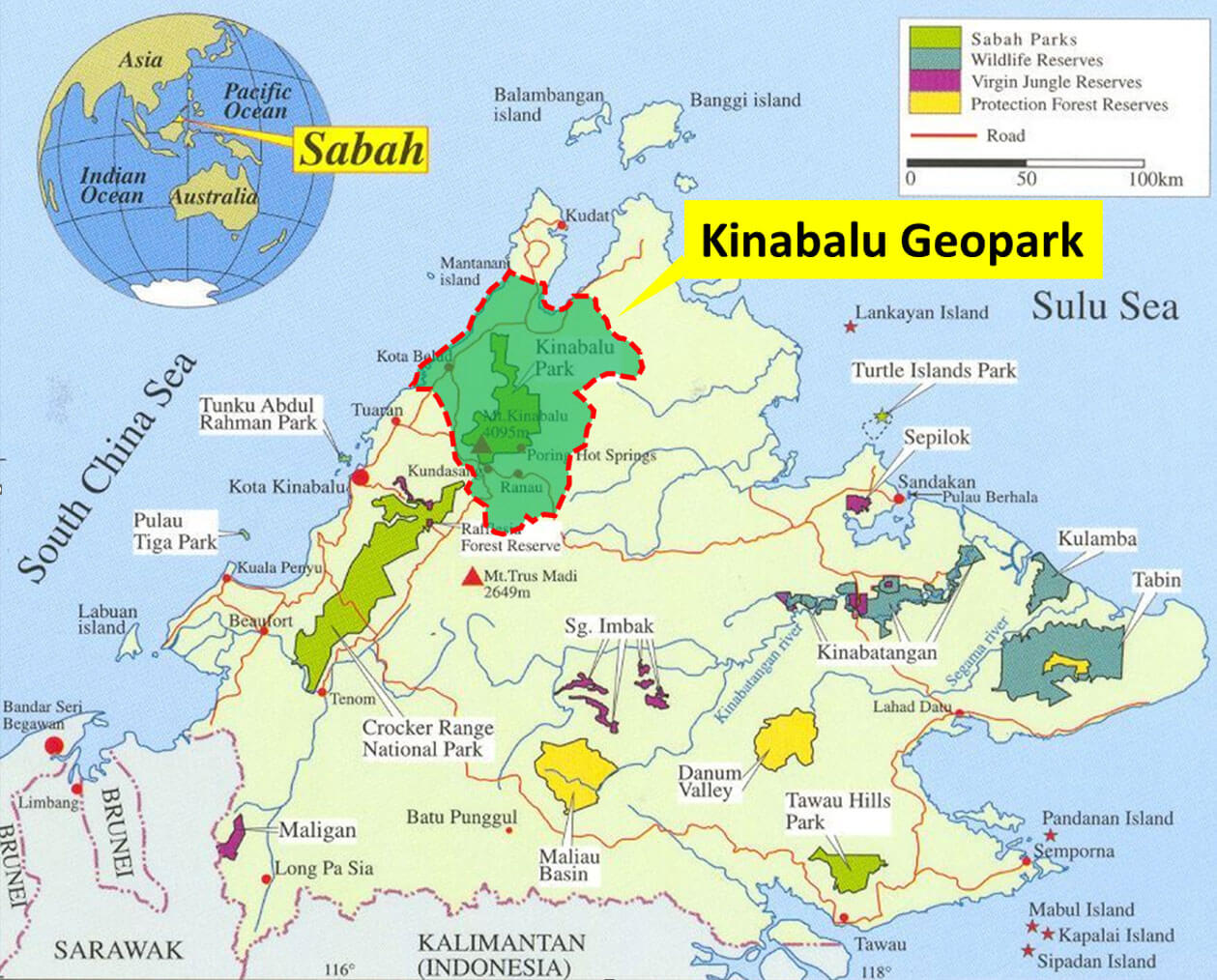 Kinabalu Geopark has a mountainous topography in the northern part of the Crocker Range, low plains, and fertile valleys in the south. The highest mountain within the geopark area is Mount Kinabalu (4095 m). Other mountains are Mount Mandalon (1117 m), Mount Templer (1150 m), Mount Langui (1196 m), Mount Nunohan (1320 m), Mount Kokohitan (1511 m), Mount Nungkok (1652 m), Anak Kinabalu (1673 m) and Mount Tambuyukon (2579 m). Among the main rivers in the geopark area are Sungai Baliojong, Sungai Tandek, Sungai Kadamaian, Sungai Wariu, Sungai Kawang-Kawang, and Sungai Sugut. The gullied sides of Mount Kinabalu are the sources of some 10 to 12 rivers, as well as waterfalls, the Cascade Waterfalls and Liwagu Falls being two of the largest. There are caves, the Paka and Tumbling Bat caves, and near its foot at 550 m are the hot springs of Poring. The geopark has a wet tropical climate with warm temperature, high humidity and heavy rainfall, but it becomes temperate at higher altitudes. February to May are generally the driest months, October to January the wettest. The temperature at the Kinabalu National Park is between 15-24oC. At the peak of Kinabalu, the recorded temperature is around 4oC or lower.

Kinabalu Geopark which includes the Kinabalu Park (about 16% of total area of the geopark), a UNESCO World Heritage Site, has an outstanding biodiversity. Kinabalu Park is designated as a Centre of Plant Diversity for globally important Centre of Plant Endemism. Kinabalu Park is among the top six biodiversity centres in the world due to its wide-ranging types of habitats, from the bare granite peak (4095 m a.s.l.) to the lower slopes (about 150 m a.s.l.), covered by natural tropical rainforests and farmlands.

Besides the Kinabalu World Heritage Site, there are other protected areas with high biodiversity conserved for various ecosystem services in the form of forest reserves. A total of 10 forest reserves are within the aKUGGp boundary. Six of the forest reserves are for the protection of watershed and maintenance of the stability of the soil, water and other essential climatic and environmental factors. Two forest reserves are for mangrove functions (timber, recreation and ecotourism development). There is a reserve for domestic purposes (a small amount of timber is allowed for the consumption of local communities only) and another for amenities and recreation for the local inhabitants. 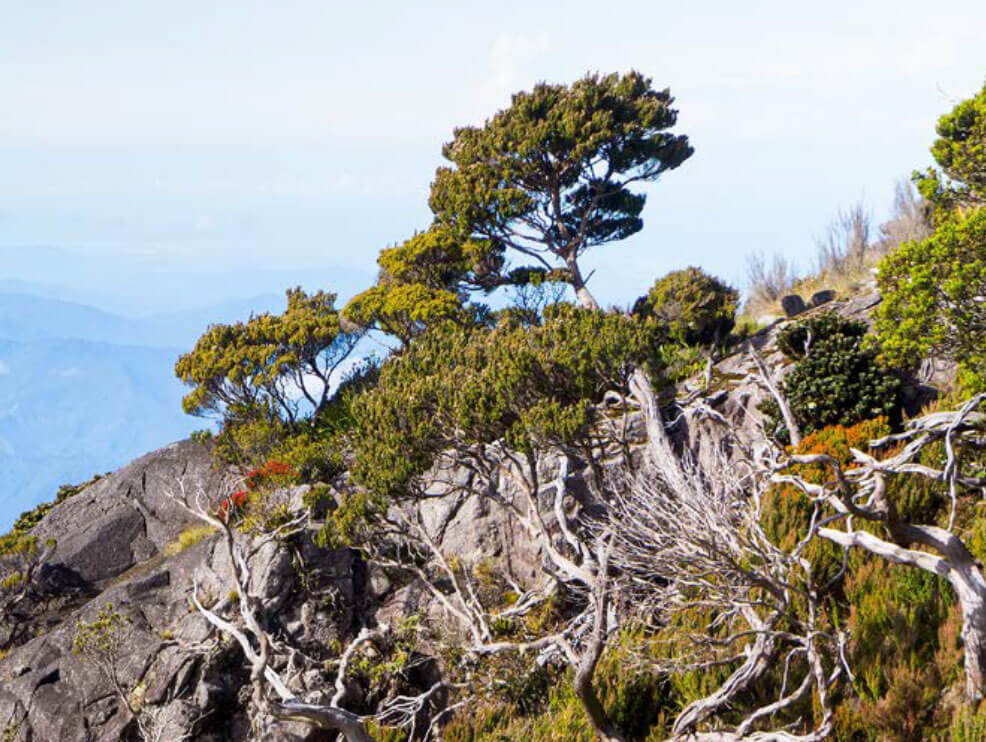 Sub-alpine habitat dominated by gnarled and stunted conifers and rhododendrons growing at about 3,300 m.

The total population in the Geopark is 291,300: 109,900 for Kota Belud district, 80,000 for Kota Marudu district, and 101,400 for part of Ranau district. The main towns in Kinabalu Geopark are Kota Belud, Kota Marudu, Randau, and Kundasang. There are approximately 423 villages in the Geopark: 176 are in Kota Belud district, 122 in Kota Marudu district, and 125 in Ranau district. Eight of these villages are listed as indigenous villages, representing the majority ethnic communities living in the Geopark. Of these villages, Kampung Lohan, Takutan, Kiau Nuluh, Piasau, and Marak Parak are where the Dusun people call home; Kampung Rampaian Laut Kota Marudu and Taun Gusi are home to the Bajau Samah ethnic group, while Kampung Baliajong is home to the Bajau Kimaragang ethnic group.

The main economic activities in the geopark include highland agriculture, animal husbandry and tourism activities, providing an average monthly income of between RM2,000 to RM3,500. Rice is the staple food from wet padi cultivated on alluvial plains or from dry padi occasional hunting are also major socio-economic activities. The formerly maritime Iranun and the communities, although some on the west coast now cultivate rice like the Dusun. In general, ecotourism is the primary economic activity, with a total of almost 4 million tourist arrivals in Sabah every year.The area covers three districts which is Kota Belud, Kota Marudu and a part of Ranau, where four townships and 472 villages (Traditional and Indigenous) of the Kadazan-Dusun, Bajau and Rungus tribes occupy respectively. Most locals rely on the structure of the area and unique landscape where their main economic activities such highland agriculture, animal husbandry and tourism activities which provides a source of income for their necessities. 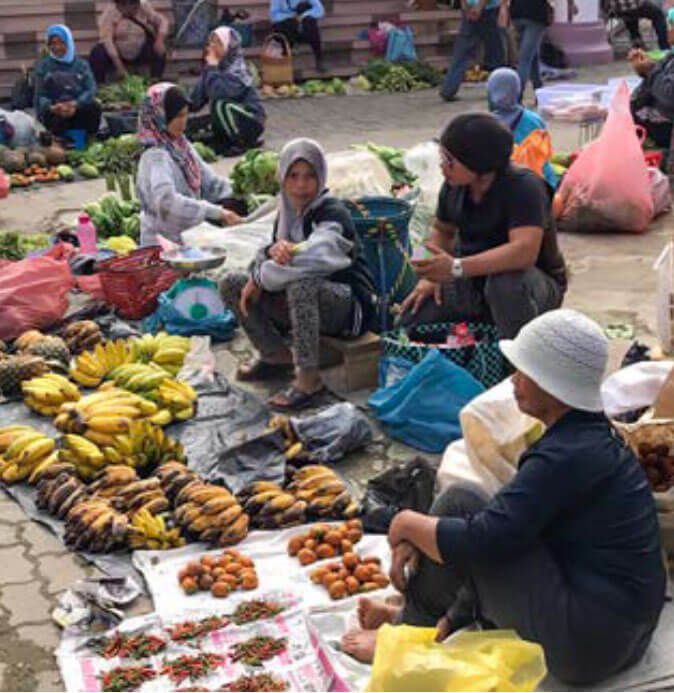